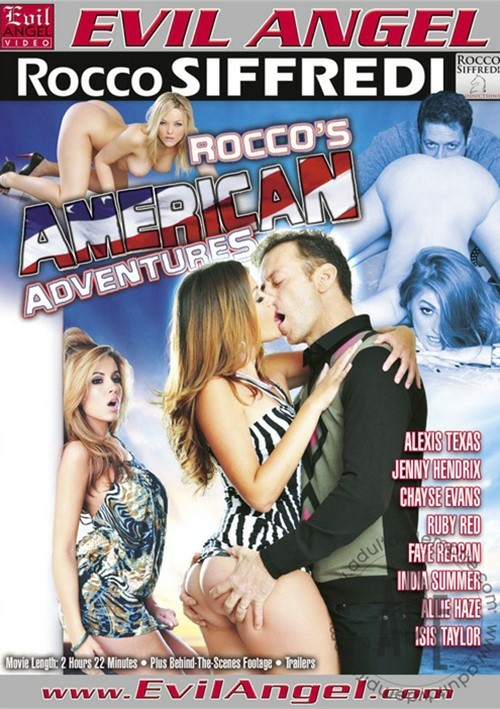 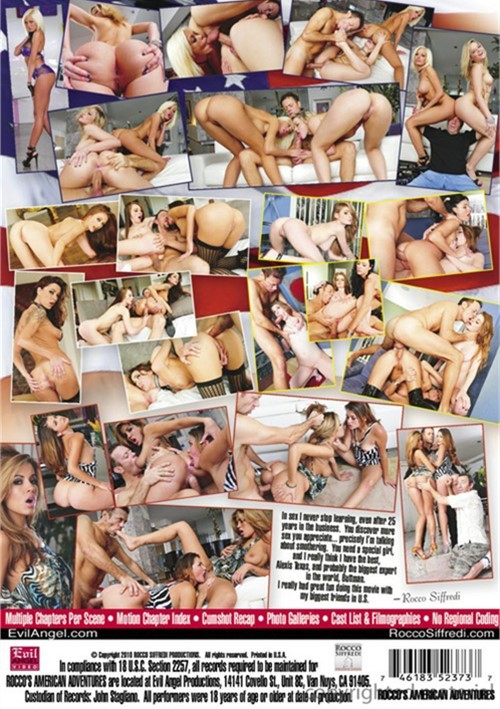 Rocco&#39;s American Adventures
In over two decades working in both Europe and the U.S., Italian-born porn legend Rocco Siffredi has come to truly treasure American girls. The director/stud gets to exercise this passion in ~~Rocco's American Adventures~~, and viewers will share the wild sexual joy he experiences among his best American friends. Rocco's friend Buttman is coaching Alexis Texas and Jenny Hendrix - two elegant, libidinous lovelies with appropriately stunning rear assets - through some fabulous booty claps and ass tease when Rocco arrives. The skeptical girls become believers when they get a look at his bona fide stud cock. Rocco is soon a believer in Buttman's kink for being smothered by stupendous ass - Alexis sits gorgeously on Rocco's face, and when Jenny butt-smothers his head, Alexis rides his cock, her rear cheeks flexing breathtakingly. Jenny rims Rocco's ass as he nails Alexis; Alexis' butt is back on his face as Jenny slams down on his thick erection. There's some toe sucking and lots more smothering booty worship, with Alexis arching her back magnificently and Rocco's head getting slammed by both tails at once. Alexis masturbates in Rocco's face and kisses her ass juice from his skin, then needs two hands to jack his jism onto Jenny's pussy. They lick his cock clean, and Rocco declares himself "ass drunk." Rocco meets slim, longhaired redhead Ruby Red as she prepares for a party in a mini-dress, see-through panties and heels. Seduced by her big, blue eyes or all the fair skin she shows, he can't resist whipping it out, and she can't resist blowing. Enter Chayse Evans, the tall, distinctively tattooed beauty who's all dressed up in a red and black corset, fishnets and high-heel boots. When Erik Everhard comes in they decide to party right there. Chayse vigorously blows his cock and takes a strong ass reaming. The girls enjoy tasting each other's pussy on Erik's prick, and Ruby gets to taste Chayse's ass that way. Erik and Ruby manage to stuff a total of eight fingers up Chayse's accommodating butt. For the climax, Chayse and Ruby spit Erik's load of spunk back-and-forth between their slutty mouths. Rocco's pal Joey Silvera hosts Rocco, dark-haired, natural-bodied India Summer and pretty, freckled redhead Faye Reagan at his fuck pad. The three make out and Rocco greases Faye's white skin and bulbous, natural titties. Faye and India blow Rocco together, and Faye's tits shake as she rides his cock. Rocco screws India as she buzzes her clit with a vibrator, her thigh-high boots still on. He keeps her face shrouded in her long, black locks through a rough, choke-filled, doggie-style fuck. Dirty Faye licks the sweat from Rocco's armpit, shoulders and face. He nails her cunt with her legs cranked back to her head and India sitting on her face. And Rocco cums in both mouths. Before a scene, adorable Allie Haze enters Rocco's room to confess that she loves the choking she's seen him enjoy in his movies. In her mini-dress, heels and no panties, the natural-bodied, seductive submissive gives him a blow job, her brown eyes making sexy contact with the camera. He pinches her nipples and chokes her ... and that's about when tall, delicious, blonde Latina Isis Taylor barges in, pissed that she's been waiting on them for the scene. Rocco chases after the dark-eyed beauty, and it's easy to see why - her tight dress and heels accentuate her sexy bod. Once Rocco's straightened out her 'tude, we get to see her hot tits and smokin' ass in the nude. She grinds her butt in his face and he grinds his prick in her crack. Allie re-emerges for more cocksucking as jealous Isis smokes a cigarette; Isis sits on his face as Allie rides his dork, her butt looking so cute. Isis tongues that butthole and pops Rocco's cock into her mouth to taste Allie's pussy. When Isis rides dick, Allie jams her head up Isis' crack for a deep, hard rim job. Allie's face flushes in orgasm as Rocco dicks her twat, stretching her legs back behind her head.